PM Zaev: Accountability is mandatory – we will not allow criminals, manipulators and frauds to prevent the country’s success 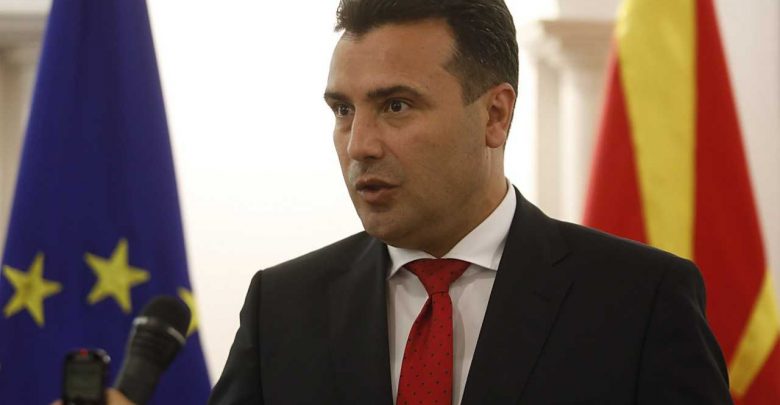 All involved in the case that violated the law will be held accountable with appropriate sanctions, in transparent judicial procedure. There must be accountability for those who invented this and for all who do anything in their power to save themselves and while doing so, present themselves as victims.

I am sorry if I have been wrongly understood or interpreted, but I remain at my viewpoint that I’ve talked about before, as well as in the belief of the values for which I’ve always fought. We will not allow the enemies of our country to succeed in their plan, by using criminals, manipulators and frauds, to prevent this country’s success – NATO membership and commencement of EU negotiations.

This was emphasized by Prime Minister Zoran Zaev in his brief interview on the reactions caused by his statement last night in the Parliamentarian Club.

Criminals, faggots, vain people and idiots – these are some serious definitions. Did you open a front with everyone? Mr. Zaev, this to you is not a discrimination, threat, if you take what was stated by you as a Prime Minister?

Both me and the Government, stand firmly in the defence of freedom of expression, freedom of media and defence of human rights of all individuals in our country. All people are equal to me and the Government. We do not make any differences based on religious, ethnic, social, political, sexual or any other base. Together with all citizens, we are committed to building and we will continue building the concept of one, shared and fair society for all. The Government reaffirms its determination for non-discrimination and respect of differences in all communities in our country, including the LGBTI community. In North Macedonia there are no more attacks over people who belong to the LGBTI community, we had a free and safe parade, while the sexual determination is included in the amendments of the new Law on Antidiscrimination for which the opposition voted against.

Considering the case “Reket” I believe that each citizen, no matter whether they are politicians or journalists, has an obligation for the legal state and for the public interest, to report all indications and information for abuse to the investigation bodies, just as I did. The primary goal in clearing up the “Reket” case must be the public, not the personal interest. As I publicly, without any prejudice, believe and invest my efforts for fair society, I also respect my own right, using terms and vocabulary used by any citizen, to indicate individuals or events in the society which are negative.

I speak of characters of people, of their behaviour. And as I sincerely and from my heart respect and promote the essential values of the journalism as a profession, and these are complete freedom of speech, expression and criticism, I also have a right to characterize whether someone is vain or has other intentions in creating certain impression in the public.

You apologized to the LGBT community; however the media organizations defined this as a threat, as an attack to the freedom of journalism and vanity from the Government which must deal with criticism?!

In these more than two years, we fully diminished the regime practice established by the previous Government, the practice of pressuring journalists, controlling media outlets and using state resources for mass advertising propaganda, paid with money of the citizens. In these two years, the Ministry of Interior acts on the cases of threats and attacks from the past performed over all citizens and is no longer used as a repression device. The society is completely free from the regime pressure, thus, we have significantly lowered the number of threats and attacks to both journalists and LGBTI community.

The media organizations and the journalists are fully included in all media reforms which have been secured for democratization and professionalization of the media so far, and their role in the reforms remains to be of key importance in the forthcoming period. On the note of raising the level of freedom and conditions for professional and democratic work of the media and journalists, we can see the numbers and the indicators of the international organizations that deal with freedom of expression, such as Reporters without Borders.

At the same time, my obligation, as a Prime Minister, is to inform all citizens for all events in the society and their background. This does not mean a threat, intimidation, influence or pressure against anyone or their work, no matter their intentions. If someone misunderstood me or has wrongly interpreted me, I am truly sorry; that is why I am giving this clarification. However, I remain on my viewpoint of which I have been talking previously, as well as on the belief in the values for which I have always fought.

And why the journalist Branko Gerovski has recognized himself under the qualification “a vain journalist” – you should ask him this question.

It is undisputed that this involves information war; president Pendarovski defines this as threatening the national security and appeals to carefully check the information presented by different parties, without violating the freedom of expression, because some of them are not intended to inform the public, but to diminish the trust of the citizens in the justice and national institutions. What is your definition? How many of these developments are in the function of preventing the Euro-Atlantic aspirations of the country and how much can it impact them?

This is the part of the fight for final victory of justice and democracy over crime and manipulations for which I can say that is traumatic, but necessary.

This case shows that our fight has a meaning, it has results. The institutions are functioning and together with the citizens, they are showing some serious resistance to irregularities. Throughout the world, in any country where the Government has decisively and sincerely created conditions for opening investigations for even the smallest doubt, everywhere this process was difficult and traumatic. The same goes for us. It will be difficult, but only like this can we became a country with rule of law. Only in this way will we become the country we want to be.

North Macedonia is ready for the challenges which is constantly facing on its road to NATO and commencement of EU negotiations. We are not first, nor the last, who have faced opponents who want to put obstacles on the path of integration.

However, the citizens must rest assured that this country has capacities and using the support from the public and from the Western democratic worlds, we will not allow the enemies from our country to succeed in their plan by using criminals, manipulators and frauds, to prevent this country’s success, NATO membership and EU commencement negotiations.

The messages from the Western democratic world are clear, unambiguous and identical to those of the citizens of our country. This means that they expect complete and unselective clearing of all cases of corruption; that the institutions are obligated, using fast and efficient procedure, to clear the current events, and without postponement to process the cases arising from the illegal wiretapping in the past.

The partners from the international community expect that the efforts of the political parties for adoption of the Law on Public Prosecution will continue in the Assembly of the Republic of North Macedonia and that all political factors must have only one shared objective – commencement of negotiations with the EU in October this year.

When do you expect the outcome for “Reket” – you said no one will be spared, but how and when?

I demand and I expect deep, precise, fast and independent investigation which must end as soon as possible and must show all details. The result from the investigation must bring accountability, only in pursuance to the proofs and the law.

I remind you that I was the first to report the case in the capacity of both, a citizen and a Prime Minister, and I have a full right to ask for all involved in this case, who violated the law, to be held accountable with appropriate sanctions, in a transparent judicial procedure. There must be accountability for the creators and for all those who do anything in their power to save themselves while presenting themselves as victims.

Government of the Republic of North Macedonia